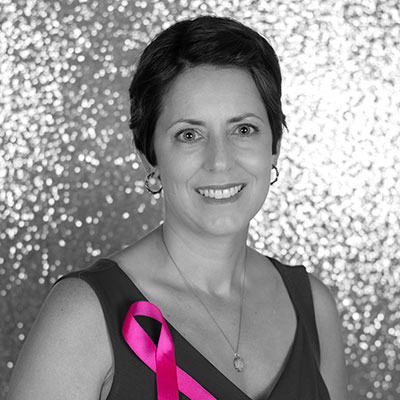 One morning after a workout in June 2017, Jana felt a slight pain under her left arm and found what appeared to be a swollen lymph node. She wasn’t overly concerned, as she had an annual breast exam in May without any issues. Moreover, she’d stopped nursing her son, the youngest of three children, only a few months earlier. With her husband, Matt, due back from a one-year deployment and their family moving to Florida, she decided to wait and see if the problem resolved. Matt returned home a few weeks later and the family moved to Niceville in July. 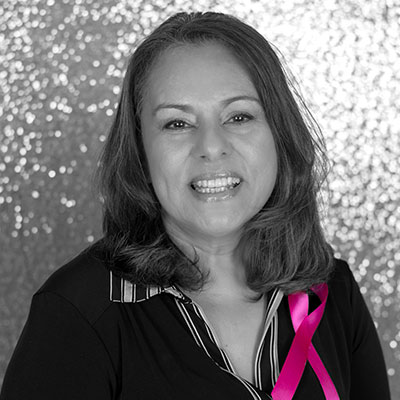 Ivonne is a three-time survivor of breast cancer, and in 2020 a combined 23 years total of being a survivor! Ivonne received her first diagnosis at age 36. She found the tumor herself through self-examination, after becoming aware of pain that felt like a burning sensation. She suspected that something was going on but was scared and put off going to a doctor for about 2 months. Ivonne was under a lot of stress trying to balance caring for her family, work, college, and a military spouse lifestyle (parenting two children by herself while her husband was away on military duty). 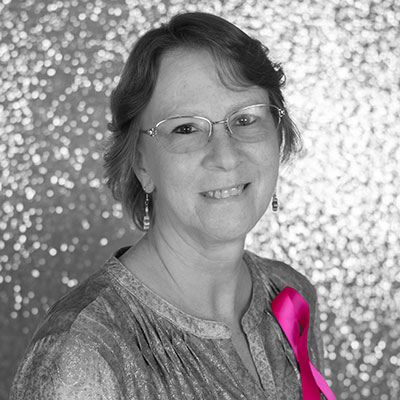 Rita’s cancer journey started about 15 years ago when she was told she had stage III breast cancer. She was in her early 40's so she was not doing regular screenings at that time but was doing self-breast exams. One early Saturday morning in mid-November of 2004, was one of those moments in her life that changed things forever. Rita detected a small lump on the outside wall of her left breast and of course with it being the weekend she wasn’t able to see her regular doctor until Monday. She confirmed the lump and started things going to get Rita in to see a general surgeon. It took six weeks to get in and the lump was very aggressive. After doing a needle biopsy her physician confirmed that she needed a tissue biopsy. 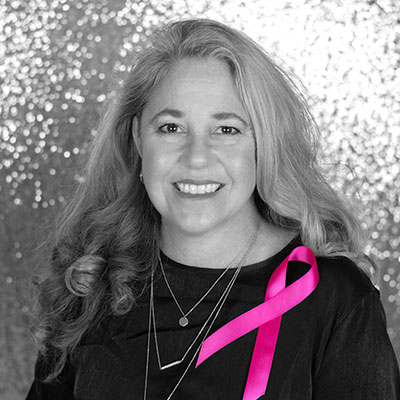 Along with walking beside many resilient friends with cancer, Anita has been going to breast cancer awareness events for many years. She faithfully gets her mammogram screenings annually but felt she was a low risk being an active athlete who had breast fed two kids and lived a healthy lifestyle with no family history. At the Stand Up To Breast Cancer Dinner in 2016 event the vendor talked about how the Digital 3D technology improved the images for radiologists like turning on a light in a dark room, so she decided her mammogram would be done with 3D imaging from then on. 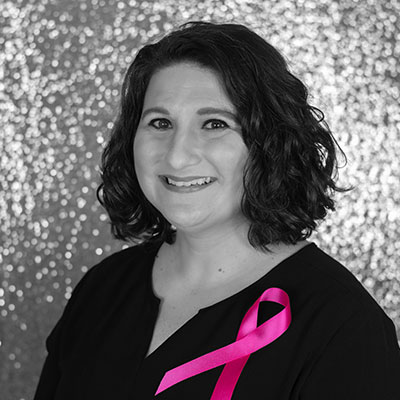 Leslie’s journey with breast cancer began in June 2016 after discovering a lump in her right breast. Being only 34 years old, and with no family history of breast cancer, she was sure it would be benign, but she made an appointment with her gynecologist to have it checked out. After an ultrasound and biopsy, Leslie was diagnosed with Stage 2, Estrogen+, and HER2+ breast cancer. Hearing the words “you have cancer” truly rocks your world, and Leslie was so grateful to find the wonderful support group Bosom Buddies during this time. 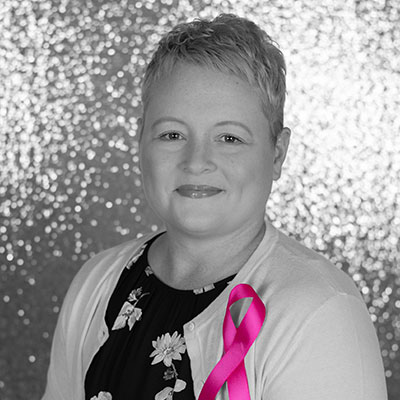 The night before Michelle’s 45th birthday changed her life forever. It was a Friday evening, and she doesn't know why, but she did a self-exam and started to worry because of the strange lump she found. Immediately her head went to a dark, scary place, as she has three children and a husband who need her. Her mind wondered as she worried how the dog would survive. How will her mom, dad, and siblings handle it if the favorite daughter/sister is no longer here (as she laughs)? But she didn't panic. 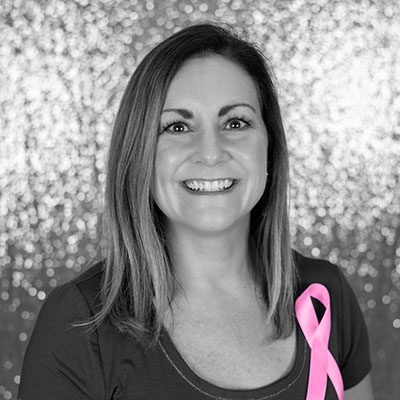 Christie's breast cancer journey began in late March 2012 when she discovered a small lump in her right breast. On Friday, April 6th, 2012 she saw her primary care physician who confirmed the lump and immediately scheduled a mammogram for the following Monday. That Monday she was told that she needed to come back in for a biopsy and the very next day she received the dreaded phone call and confirmation that the lump was cancerous. What followed soon after was a three-hour appointment with her oncologist, radiation oncologist and surgeon. 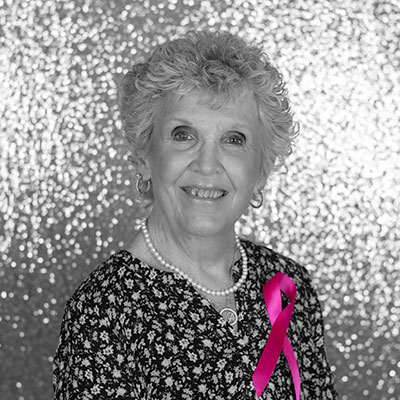 Bettie has been married to her husband for more than 50 years. He has been her rock and support through all she has experienced since being diagnosed with breast cancer last year. They have three children and twelve grandchildren. 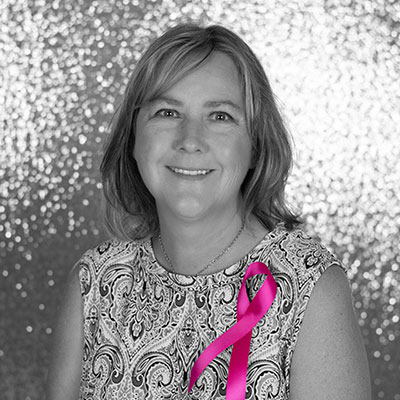 In March of 1993 Jan miscarried quintuplets and that is where her story begins. The doctors told her that if she would have stayed pregnant, she never would have found the lump in her breast. She called her mother and scheduled an appointment with her oncologist, as she was a breast cancer survivor as well. They performed several tests and said Jan needed a biopsy. 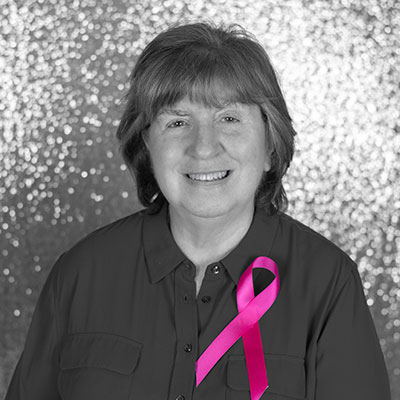 Cynthia has been married to her husband, Edward for 37 years and together they have 10 children and 12 grandchildren. In 2008, when she was 54 years old, Cynthia noticed some swelling in her underarm. After many mammograms and ultrasounds and the persistence of her surgeon, she received her stage 2 cancer diagnosis. She underwent a radical mastectomy and chemotherapy and has been cancer-free ever since. 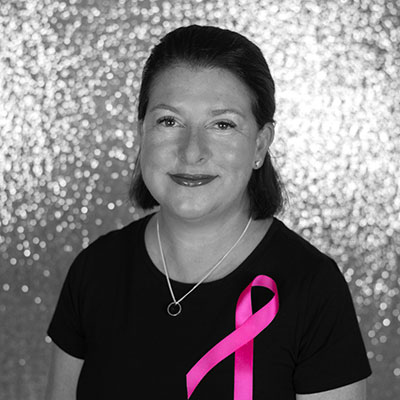 Daphne’s mind ponders the thought of “Stand Up to Breast Cancer.” Her first thought was, not only did she stand up to breast cancer, but she did it twice! And now she stands as tall as a treetop due to the physical and mental challenges she had to overcome. Daphne feels laughter is her medicine - a big ‘ol belly laugh is the salve that heals her soul. 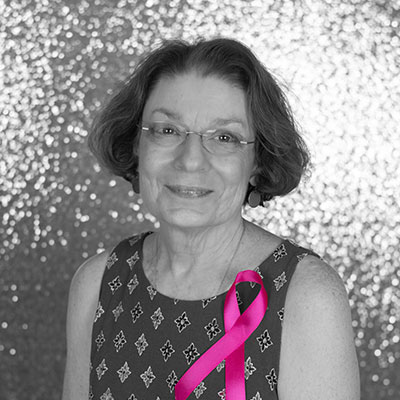 After Penny’s annual pap and breast exam in mid-October 2015, her doctor insisted that she have a mammogram. She had not had one for several years, excusing it because there is no history of any cancer in her family and she thought the tests were so uncomfortable. Nevertheless, she found herself having a mammogram one week later. Since there was not any notification from the hospital or her family doctor, she did not worry about abnormal findings. 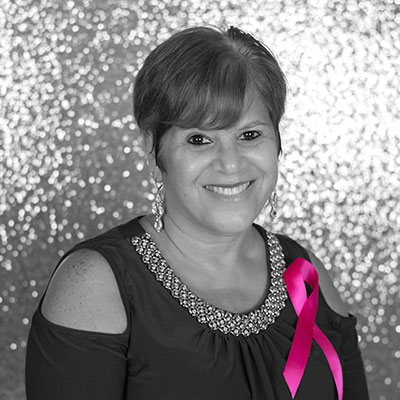 During Lillian’s annual 3D mammogram in November 2019, the radiologist noticed a suspicious area and strongly recommended a stereotactic biopsy. When called in to her primary care physician’s office to go over her results she quickly remembered her maternal grandmother needing to have a partial mastectomy due to breast cancer. She feared the possibilities of the results. When she was told the results were suggestive of breast cancer, Lillian was unable to hear anything else that was said and could not wait to read the actual results that diagnosed her as having Invasive Lobular Carcinoma. 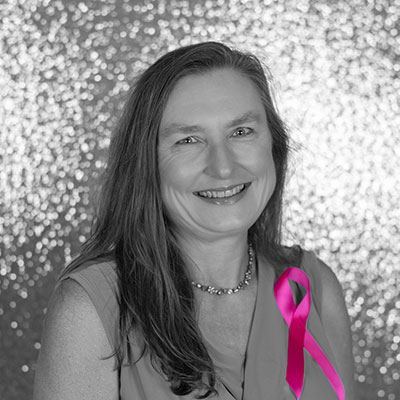 Lisa is a Northwest Florida native, born and raised along the beautiful Emerald Coast. Lisa received her breast cancer diagnosis in October of 2009. Her treatment included a mastectomy, six months of chemotherapy, three months of a shiny bald head, one year of targeted therapy, another mastectomy, reconstructive surgery, five years of chemoprevention meds, lots of tests and checkups; and ALL of it sprinkled with plenty of humor.